Kanyakumari Wildlife Sanctuary is a protected area in Kanyakumari district, Tamil Nadu with high biodiversity. Variety of wildlife can be seen in this division. Tweet 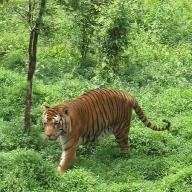 Kanyakumari Wildlife Sanctuary is a 402.4 km2 protected area in Kanyakumari district, Tamil Nadu South India declared in February 2008. The area is a tiger habitat. The area is a wildlife corridor with high biodiversity, and in addition to tigers, is home to the threatened species :Indian Bison, elephant, Indian Rock Python, Lion-tailed Macaque, Mouse deer, Nilgiri Tahr and Sambar deer. There are a few tribal villages in the sanctuary and adjoining reserve forests.

Variety of wildlife can be seen in this division as follows: