Olakkaruvi or Ullakarvi is a waterfalls on Western Ghats, is a picnic spot. It is a rocky forested area. Tweet 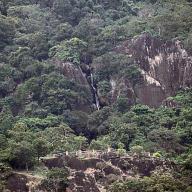 Olakaruvi or Ullakarvi is a waterfall on the Western Ghats hills around 25 km from Nagercoil, Kanyakumari District, Tamil Nadu state.

The view from this spot of the greenery below the hills is exhilarating. Good to have bath and relax for an hour. The water here is cool even during the hot months, though the water flow is less during the summer months.